How to Use Contracts, Drawings and Notes to Win Construction Court Cases 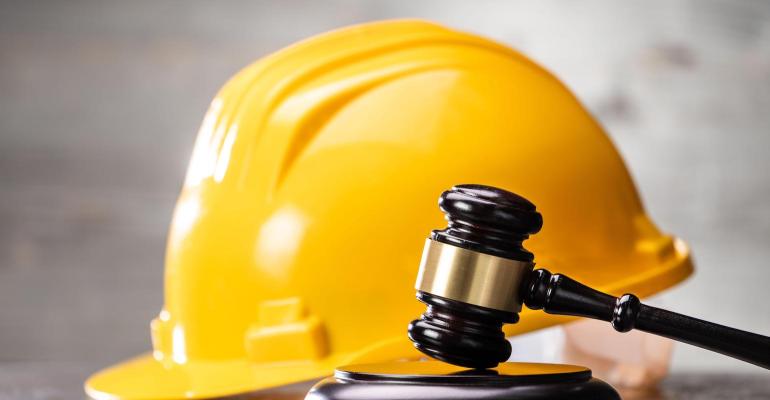 Contractors have a credibility “weapon” in construction defect litigation—detailed project and meeting documents.

Construction firms have strong “weapons” that they can turn to when they are sued by owners, architects and others: contracts, drawings and meeting notes. But they need to learn how to use them properly to win cases in court and through mediation, said three lawyers.

“Every job is different; every job is not perfect,” said Todd A. Harpst of the Harpst Becker law firm in Uniontown, Ohio, which works for all types of contractors. “When you’ve got an issue, what are (the documents) you can use to be your own best advocate?”

Harpst told several hundred attendees at the World of Concrete recently that documents can be “weaponized against you…you can weaponize them to be an advocate for you.” Harpst was joined by two of his law firm colleagues, Joseph R. Spoonster and Christine M. Garritano, in Las Vegas for the WOC presentation.

The three lawyers presented several cases to show contractors how to be credible in legal disputes so they can be their own best advocates. “Credibility,” Harpst said, “is the key to success in dispute resolution.”

The owner or general contractor wants to make a change. He gives you a verbal change and you implement it. But you didn’t get the change order in writing, and you didn’t change the scope out of the work in the contract.

(Note: If you are working on public projects, a change order must be signed by all appropriate parties; if you get a verbal change order, it is not legal, Garritano said.)

Garritano provided a case study to illustration this situation. An Ohio university embarked on its biggest construction project ever—an athletic stadium—and the project under construction was looking like it was going to be $7 million over budget. Metal sleeves were supposed to be installed in concrete walls, but to lower costs, the project team used another product in the walls and saved $50,000.

The change happened after the concrete contractor started work, but no written change order was executed by the university or the contractor.

Over the ensuing years, the concrete around the railings and in other places in the stadium experienced “very significant damage.” The university said that was because the contractor failed to install the metal sleeves, the lawyer said.

But the contractor’s project manager described in detail in meetings with university representatives and others the changes and asked if the owner understood the changes.

In the project meeting minutes, no comments or disputes by the university were found, and the contractor used the minutes to show there were no objections to the alternative product.

“The contractor had record after record,” Harpst said. “It wasn’t just he said so. (The meeting minutes) gave the contractor credibility that allowed him to prevail in court.”

But, Harpst said, too many contractors don’t keep detailed notes. “Don’t make a claim that you cannot support,” he said. “Make sure your project records always reflect what is going on with the project.”

The second case study the lawyers presented involved a multifamily project with 300 units. The framer installed 2,000 wall panels with a single top plate in a seven-month period, but building inspectors said the panels should have a double top plate.

The supplier was sued because the architect and owner were “pretty confident” that the drawings showed there were two top plates, Harpst said. (The owner didn’t make a claim against the framer, though, because the owner bought the panels and hired the framer.)

The main issue in the case were the shop drawings, which showed single top-plate panels, and they were approved. “Not everyone gets these (drawings) back,” Harpst said, “but they can be very compelling in court.”

The arbitrator accepted the supplier’s argument: “I submitted the shop drawings, you accepted them and approved them, and watched me (install single top-plate panels) 2,000 times and didn’t say anything.”

The absence of project records in this case went against the owner, Harpst said. “Nobody ever said anything, so the supplier prevailed.

“The lesson that came out of this case was know how to leverage the contract documents,” the lawyer said.

Spoonster described a case involving a $5 million addition to a Baptist temple. The law firm represented the electrical prime contractor.

The contractor’s bid was accepted even though it didn’t include the fire alarm system. Plus, the system required low-voltage wiring, but that wasn’t in the bid either.

The contractor decided to fight the architect and owner, but it was taking a risk because it only had been paid $12,000 even though it owed hundreds of thousands of dollars to suppliers and labor, he said.

In the end, the owner had no choice but to pay the electrical prime contractor in mediation.

“The real issue in this case was the architect wasn’t doing what was specified in the contract,” Harpst said. “You have to behave like it says in the contract record.”