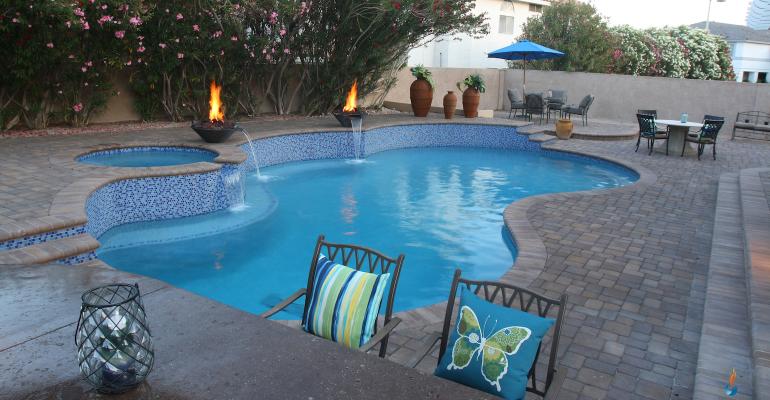 Seasoned pros use these strategies to up the sticker price—as well as the overall value and satisfaction of the finished product.

Post-COVID, the residential pool and spa renovation market, which exploded during the pandemic, remains in high demand this year.

“It’s the best it’s been in 40 years,” said John Versfelt, owner and president of Southernwind Pools.

Research backs up that contention. In Pkdata’s most recent consumer research study, almost 40% of in-ground pool owners reported plans for renovations in the next three years, with their top projects including resurfacing gunite and backyard landscaping, according to a report on itswebsite.

While the renovation market is vast, savvy pool builders and spa installers know the real opportunity lies in being able to give customers more than what they initially thought they wanted. Walking that line, however, isn’t easy.

Here are five strategies seasoned pros use that both up the sticker price and the overall value and satisfaction of the finished product.

“Sometimes what they say they want isn’t the best thing for them,” said Versfelt.

“When it’s old you need to change it,” said Joe Vassallo Sr., president of Paragon Pools. “All you can do is let them know, ‘Yeah, I can do this now, but you’re going to be calling me back in a couple months or a year.’ There’s a value in that versus trying to put a Band-Aid on something.”

2. Don’t sell new equipment or technology, explain their value. As pools and spas age, and customers spend more time at home, the need for equipment upgrades is another big driver of renovations—and business.

Customers with older pools are often amazed at the options now available to make their lives easier and that don’t require major reconstruction.

“There are so many things out there like new lighting, remote controls and even safety devices that can be done relatively easily,” said Joe Vassallo Jr., vice president of Paragon Pools.

He added that once he explains the benefits of new technology and equipment—convenience combined with cost savings—“most of these products sell themselves.”

3. Show customers upgrade options, even if it’s outside their budget. This technique is one of the most basic, but also most effective ways to upsell. For example, customers who want a plaster refinish might think they just want new plaster—until they see options such as glass tile or PebbleTec.

“I’ve never bought a car that was basic,” Vassallo Sr. said. “I always go for the upgraded car.”

Versfelt said that upgrade mentality extends all the way to redoing the entire backyard. “I don’t believe in the phrase, ‘I can’t afford it.’ We buy what we want,” he said. “So, I tell them, ‘You can have it just look, or you can have a showpiece. I’m not talking about bells and whistles—let’s make a whole new pool for you.’”

“That way, if you tell them, ‘This is something you should really have on your pool,’ they’ll take that really seriously,” Vassallo Sr. said. “Not only does that set you apart from your competition, but it also puts you into a place where you no longer have to upsell; it will just happen.”

Not only is that technique good for individual builders, but it’s also good for the industry. “I think a lot of people in the industry feel like we’re all doing the same thing, and we have to on a special installation or price advantage, rather than ‘I’m going to create a whole new backyard for you that’s going to become an integral part of your home,’” Versfelt said.

5. Listen to the customers’ vision, not their budget. The key word with this technique is “listen,” said Versfelt. That means hearing what customers are saying—but more importantly it also means listening to what their homes are telling you. Often, what builders will see are home interiors that are brought up to modern standards and backyards that are still woefully out of date, he said.

“Ground yourself in their vision, and don’t focus on what they’re saying they want,” he said. “Just step back and say, ‘lets create a vision for an outside space that’s as beautiful as your inside space.’”

Once builders can help customers see and achieve that vision, budget is no longer an issue. “I don’t try to win them on budget, I try to win them on the experience—on truly being satisfied with the end product. If you do that, you’ll have a customer for life.”

4 Reasons European Hot Tub Companies Are Diving Into the US
Dec 16, 2022